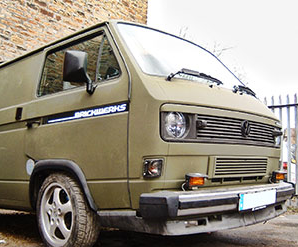 SJ Baxter Motor Engineers opened in April 2005 initially as a normal, run of the mill backstreet garage. Soon, Transporter owners from near and far started flocking to the small garage in the back streets of Huddersfield but it wasn’t without its problems.

Some hard lessons were learnt in the fact that you cannot rely on local motor factors to supply good quality parts for 20+ year old vans in the usual 1 hour service you get for normal cars and you cannot control the quality of what you end up with in desperation to keep the work moving and customers happy.

After a few interesting episodes of customers who had travelled quite a long way and not being able to get home because their vans was in pieces on the only vehicle ramp we had as we had parts supply issues, it became obvious that parts must have to be on the shelf!

Then, having to put right vehicles because the parts you bought have failed resulted in far too many late nights and disgruntled (but understanding) customers. Having being quite prolific on T3 and T4 owners internet forums, people knew about what happened in Huddersfield they started ringing up and asking to buy the parts on the shelf.

Trying to do 8 hours’ worth of work, answer the phone, and post parts to people single handedly became tedious, and resulted in more annoyed customers as the bloke they travelled hundreds of miles to get to fix their pride and joy spent more time on the phone than on the spanners!

A web shop was a must!

The first attempt was knocked together with dreamweaver and was very basic indeed, it acted more like an online catalogue, postage was guessed (often badly at our expense) and the admin side became a pain in the proverbial.

Instant improvement! No more wrong addresses as notes that were taken in the past were rushed, phone calls slowed down and postage no longer cost us money!

So, we now needed somewhere to put all this stock, there was a small room above the office at the workshop in Paddock, it was no bigger than 3m x 3m, stacked to the roof with parts!

Brickwerks needs to spread out!

In Nov 2008 with lots of help from friends, relatives and even customers SJ Baxter motor Engineers moved premises to our current location in Honley, near Holmfirth.

2 units were rented, one for parts and one for repairs, there was a reception and even an office that we could put the plotter to make vinyl lettering and stickers, brilliant! The units were previously occupied by some fabricators, messy ones at that so weeks were spent tidying the place up.

One big garage, 2 ramps, fancy wheel alignment stuff, tyre fitting and balancing equipment… it was all slotting into place, now staff were needed! After a few failed attempts at getting reliable staff for the workshop, a change of plan meant I left the job of running the sales side of things to long term “Mukker” Michael Tyler, and me to move back into the workshop.

Next, take on more stock, sorted.

In late 2010 or landlord had 52 solar panels installed on our roof, inside the unit with have 2 inverters which feed into the substation for all the units in Bridge Works.

Websales have increased year on year and so has the number of staff required to keep up with demand.

In mid 2019 the tough decision was made to close the workshop for good and concentrate on websales, plus we needed more room for quality stock!

2020, we’re currently running at 6 members of full time staff and a couple of part timers helping out on the busy, post weekend days!

We use cookies to ensure that we give you the best experience on our website. If you continue to use this site we will assume that you are happy with it.Ok